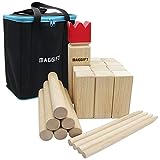 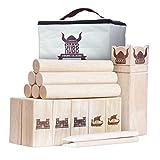 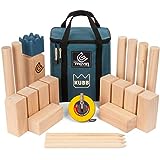 If you’ve never heard of the game Kubb, it’s a forgivable offence. It’s not quite as popular as other backyard favourites like Cornhole or Horseshoes, nor does it require a learning curve like ping pong. Kubb is a game from a different era, one that has a unique set of rules and a very interesting way of playing.

Originally from Scandinavia, this game can be described as a blend of chess and bocce ball, although in a very remote manner. Let’s learn more about it and how to play.

Learning specific names for each of the game’s components makes it easy when you have to explain the game to your buddies or kids. Here are the terms you will use frequently:

How to Play Kubb – Game Rules

Kubb is a team lawn game played by two teams consisting of one to six players. Commonly though, it is played in teams by at least three players, following the rules below.

To setup, the game, measure a rectangle of 26 x 16 feet and place a corner stake in each corner. Draw an imaginary mid-line that divides the court into two halves (length-wise), and place a mid-court stake on each side of the court to mark the middle.

Each team takes a position at the opposite ends of the court and place their kubbs on the baseline. The king is positioned in the middle of the court.

To start the game, each team throws a baton as close as possible to the king but without hitting it. The team that has their baton closer starts the round.

According to the US Kubb Championship:

Any kubbs knocked down during this phase are collected by the team and thrown towards the opponent team across the other half of the court. These kubbs become field kubbs and are placed upright inside the court in the place where they have landed.

Now, players have the purpose of knocking down the opponent field kubbs, the remaining kubbs on the opposite baseline, and ultimately the king. Each team will throw all six batons before giving the turn to the second team.

If a team doesn’t knock down all the kubbs in the opponent’s field, the opponent has the right to move the kubbs closer to the center line and throw their batons from there to hit the opponent’s kubbs. However, all batons thrown at the king and all kubbs threw back into the field must be thrown from the baseline.

The team who manages to knock down all the kubbs in the opponent’s half of the field, the kubbs on the baseline and the king in one turn wins the game. However, if the team knocks down the king before taking all kubbs out of the game is disqualified and loses immediately. That’s why kubbs located within the king’s proximity are the hardest to knock.

The team who wins three games before the other also wins the match. However, you can agree on any other arrangement.

Players must shake hands before and after the game, and maintain a healthy competitive spirit.

Combining strategy with summertime fun, kubb is one of the most exciting games to play. Because it doesn’t need an actual court, it is also easy to set up anywhere as long as you have some sticks and the kubbs with you. Undoubtedly, one of the best games for tailgating and camping.