How To Play Bocce Ball 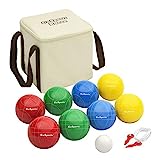 Similar to the French pétanque or the British bowls, bocce is one of the most popular backyard games. Its success is due to the simplicity of the game. Players of all ages learn to master it in no time, but if you’ve never played it or find it hard to understand it, check out these bocce rules for dummies – and remember to go over our reviews of the best bocce ball sets here…

In essence, just like corn hall, or washer toss, bocce is an uncomplicated game. Like any respectable backyard game though, it has some fancy terms that can easily confuse a rookie. Before talking about rules, therefore, it is essential to understand what we’re talking about.

Standard bocce requires for two teams of four players. Each team divides its members, placing two at each end of the court. Each player gets to play with two balls, and they can’t switch ends during the game.

Although standard regulations allow teams to play even if they have only two or three players, the rules impose a penalty of two balls per missing player.

In a backyard arrangement though, you can adapt this rule to your own liking keeping in mind you’ll still need at least two players per team, one stationed at each end of the court.

While most lawn games give you the flexibility to choose who starts the game in any possible way, bocce requires a coin toss. Game etiquette asks each team to elect a captain, and the two captains participate at the coin toss.

The winner of the flip gets the first toss of the pallino as well as the privilege to choose the color of the balls.

If you’re playing a tournament – aka multiple consecutive games – the winning team of the first game gets the first toss of the pallino in the next game.

The pallino is always the first ball put into play and must be thrown underhand from behind the first foul line. It must end up across the center line without touching the backboard of the court and at a distance of at least 12 inches away from the sides of the court.

If the first player throwing the pallino fails to do this, the ball passes to the other team, and another player gets to throw it.

If the second player also fails, the pallino must be placed approximately in the center of the second foul line at the opposite end of the court. Once the ball is into play, you can hit and knock it anywhere on the court, except backward over the center line or out of the court.

The first player who throws a bocce ball is the initial pallino thrower. All bocce balls must be thrown underhand in a bowling throwing style, and the first ball thrown by each team must not hit the backboard.

The balls must be thrown from the first foul line marked on the court. After the first ball is thrown by each team, all succeeding balls are thrown by the team that has their ball further away from the pallino.

The other team, called the IN team, will only throw when the opponents have thrown all four balls. It is important to note that if a ball goes out of the court, it is considered a dead ball and will not count towards scoring in that frame (or turn).

Once all bocce balls have been thrown in one direction, the game reverses in the consecutive frame when they must be thrown in the opposite direction by the players stationed at the other end of the court.

The score for each frame is calculated after all 8 balls have been played and measured by the team captains. One point is awarded for each ball that is closer to the pallino compared to the opponent’s ball, which means each team can score between zero and four points on each frame.

The team with the higher score during a frame throws the pallino in the next frame, and the rest of the game is played as described above.

In the event of a tie, the team that has thrown the first pallino gets the privilege to deliver it in the next frame too.

The team that scores 12 points first wins the game.

If you want to play tournaments, know that a typical match consists of three games. However, you can set your own number of games in each match depending on how much you enjoy bocce or how much time you have available.

While most lawn games are flexible on etiquette, things are a tad more strict when it comes to bocce. The most important etiquette rule is your behavior. Bocce is a gentlemen’s game, albeit women can play it too.

Outbursts and trash-talking are severely penalized in tournaments, and things should stay the same in your backyard too.

Bocce is also an open game. There must be no hidden strategies; on the contrary, your defensive plans and bank shots must be announced loudly.

Also, check where you’re keeping your feet. It is essential to play your pallino and bocce balls from behind the first foul line. And although this is a slow-paced game, remember that you can’t wait for ages before throwing your balls.

Whether you needed to learn the bocce rules for dummies or just freshen up your memory, you now know what it takes to make the most out of this fabulous game. Ideal for both adults and kids, bocce balls can easily entertain your party at the next barbecue gathering or right after your horseshose game challenge!

TheBackyardSite.com is a participant in the Amazon Services LLC Associates Program, an affiliate advertising program designed to provide a means for sites to earn advertising fees by advertising and linking to amazon.com. Amazon and the Amazon logo are trademarks of Amazon.com, Inc. or its affiliates.