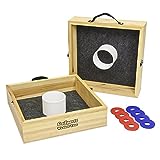 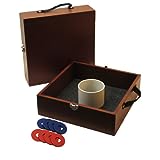 Washer toss, also known as washers, is one of the best camping games. It’s fun for people of all ages and fairly simple to play like life size jenga or corn hole. If you’re new to it, this step-by-step guide will teach you how to play it like a pro.

Washers is a game of skill, strikingly similar to horseshoes or bocce ball. It is much more popular though, majorly thanks to its simplicity. While scoring a perfect ringer with horseshoes might be a hassle, throwing a washer into the cup is easier for players of all ages.

This game is also simple to set up and, due to its reduced dimensions, easy to carry. So, here is everything you need to know to play washer toss like a pro.

Like any lawn game, washers come with its own terminology. Yes, you could just use words like cup and box, but that wouldn’t sound as fancier as the real game terminology. So, before getting started, here are the important things you should know about.

Here are the rules for playing washer Toss:

Washer toss is a game to play either in two or in two teams with up to four players each. In the case of teams, each one must nominate a captain, and only one player in each team may toss the washers during each round.

1. To start the game, position the washer pits at a distance of app. 25 feet

To start the game, position the washer pits on the ground at a distance of approximately 25 feet. Each player must sit next to the same pit and toss the washers to the opposite pit, and the game will reverse during the next turn.

While most lawn games start with a coin toss, washers game starts with a diddle. This is the act in which each player throws a washer to the opposite pit. The player or team that tossed the washer closer to the cup, or the one who has scored a cupper, starts the game.

2. Toss the Washers: goal is to get the washers into the cup or as close

The player who won the diddle starts the game by tossing both washers to the opposite pit..

In a game with standard washer pits, the player can sit anywhere inside the pit when throwing. In  a backyard arrangement with no pits, unofficial rules say the players must sit at no more than one step in front of the cup.

After the first player has tossed both washers, it’s the second player’s turn to toss, following the same rules.

In the next turn, the player who scored more points in the first round gets to throw their washers first.

3. Scoring: Only one player or team may score in each round

Who scores the points is determined by the washer’s proximity to the cup.

Washers tossed inside the cup are called cuppers and value 5 points.

A washer tossed inside the pit but not in the cup values 1 point. Only the washer closest to the cup scores the point, so a player may get either 1 or 5 points per round.

Washers tossed outside the pit are ineligible for scoring, and if both players have managed to score a cupper, they both receive zero points. The same happens if both players tossed their washers at equal distances from the cup.

The player or team who reaches 21 points first wins the game, but there are some exceptions from this rule.

If one player or team manages to score 11 points before their adversary manages to score any point, the game is called a skunk and ends earlier with the elimination of the player from the competition.

If one player or team scored 17 points while the opponent has only scored 1 point, the game is called a whitewash and the player scoring only 1 point is out of the competition.

In a backyard arrangement, it is possible to adapt all game rules to fit younger players or seniors; however teens and adults should follow these guidelines.

Washer Toss’ etiquette is similar to the horseshoes’. Each player is responsible for setting one pit. The players must shake hands before starting and avoid distracting the opponent during a toss.

After each turn, the players must walk together and asses whose washer is the closest to the cup. It may also happen that during a toss, one player can move the adversary’s washer closer to the cup, and in this case, the fortunate player wins the round.

It is unacceptable for a player to move the washers before the other player agreed with the score. Measurements are typically approximated by simply looking at the washers. In the rare event in which two washers seem to be at the same distance from the cup, the players must use a ruler or meter to assess whose washer is closer.

Regardless of the outcome, the game must always end amiably with players shaking hands and congratulating the winner.

Like most backyard game, washer toss is an uncomplicated and fun one to play. Flexible rules and the possibility to ditch the pits and only play with cups set on the ground make it ideal for most circumstances.

This game is also perfect for the youngsters, as the washers are lightweight and the cups must be positioned at a distance to suit the kids.

And now you know how to play it! So, what are you waiting for? Get yourself a washer toss game, set it up, and get ready to have loads of fun this summer!